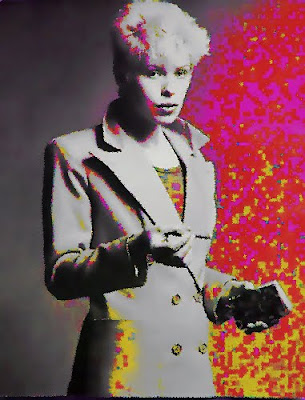 Judy Nylon is an American artist who moved to London in the very early 1970s. She was half of the punk act called Snatch, which also featured Patti Palladin. Only those who lived in New York and London during the era that spanned glam and punk are likely to appreciate her importance, most of which isn't preserved in print, vinyl, or CD. In terms of cultural significance, she has been ranked with Patti Smith, The Raincoats, Chrissie Hynde, of The Pretenders, The Slits, Lydia Lunch, Siouxsie Sioux of Siouxsie & the Banshees and even Nico.
Her Pal Judy record was released in 1982 and has been described as "a classic rainy day bit of sound and song to drift away to"[who?]. It was co-produced by Judy Nylon and Adrian Sherwood of On-U Sound and Tackhead.
She is the Judy in Brian Eno's Back In Judy's Jungle[citation needed]. Nylon is responsible for inspiring the Eno version of ambient music[citation needed] (the back cover of his Discreet Music contains his version of how this happened). - Wikipedia® 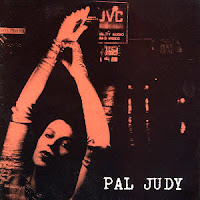 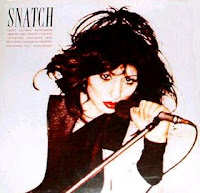 Get them both here:

many thanxs 2 exume these gems!
wonder like miss "judy vega"!

I actually own that "Pal Judy"-record but I have never listened to it. Maybe I should.

The album she did with Adrian Sherwood is a classic and yet she is seldom mentioned whenever the On-U-Sound legacy or for that matter the wider history of "punk" is recalled. There are a number of female artists from the late seventies/early eighties such as Cristina, Annie Anxiety, Honey Bane & Danielle Dax to name but a few who produced some amazing music and its great to see blogs like this keeping their legacy alive...Also thanks to Jamian Juliano-Villani for the data(byte) on her collaboration with John Cale which I never knew about..see it pays to leave comments ;)

My sincere THANKS to you & your great blog, for your valuable time & effort in digitizing this (and all the other!) RARE, GREAT VINYL!
Judy Nylon's work is hard to find, and it is really important in early art-punk culture. (The SNATCH ep EXTREMELY hard to find...but worth it!).
Keep up your fine effort at sharing great, obscure records to the virgin ears of the world!